skip to main | skip to sidebar

My car is 9’ inside from corner to corner. As you are able to see by this first photo of an 8’ x 8’ heart inside my car.

As a church we are reading through the Bible in a year. These are the first few weeks of the series and the stage designs.

The hearts are simply cut from 8’ x 8’ sheet of foam and hung with fishing line and safety pins. The largest heart was cut in two pieces and taped together in the back. We change them around some each week and add additional props for each story.

The 3rd week, I added red hearts to the hearts and additional hearts and leaves strewn across the stage for the Story of the Sower.

For this last week, Misguided Heart, our stage changed to reflect an old series we did (see the stage here) because we reintroduced a character from our "Imperfect Church" video (you can see her @ 4:55) with a cool live sketch. Sadly, it didn’t get video properly. We may go back and try to video tape it again.

This is the original video for “Imperfect Church”. You really should check it out.

Posted by Perky Gramma Teaches at 8:15 AM No comments:

While I am still doing stage designs for the weekend service, I recently have been on a little side jaunt. For the last three weeks, I have been doing the childcare for my daughter-in-law’s small group Bible study on Ruth & Naomi (by Beth Moore). The ages range from 2 years old – almost 6.
Currently our church is doing a year through the Bible. I decided to mirror the teaching on Sundays.
Though next week, I seem to be stuck since we are in Leviticus.

The mom’s were saying I should be writing these down or taping the sessions; LOL! Writing it down it is hard to show just how much fun we are having. I was actually tickled this week. I usually let the children play for about 10 minutes, while I unpack and get ready. This week after about 5 minutes, they all asked if we could just do the lesson first. Love these little ones. So here goes…

Most important just make it FUN!
Next, I think that the biggest thing is repetition & interaction.
Each week we read the actual story for the “Beginners Bible”. I want them to understand that all of this comes from God’s word.
Remember children will easily make imaginative jumps. For example adults would probably get stuck on the fact that I used a reindeer lawn ornament, instead of a calf in the Golden Calf story. The children had no problem “getting” that it was a calf.


Week 1: The Parable of the Sower
Started with “The More You Know the Bible”
Simply read the story from the “Beginners Bible” and acted it out.
Had seeds that I cut out to act out the story.
Birds: well, I just happened to have to little rubber ducks.
Hard Ground: a wooden chair
Thorns: we pretended and used “straggling hands”
Grow: had a bunch of leaves from fake flowers

Found this song on the internet ‘Sow, Sow, Sow the Word”
Had little packs of nut (we called them seeds) for the snack

Week 2: The 10 Plagues
Thankfully it is close to Halloween, so I was able to find all the unusual items I needed for this.
So we read the story from the “Beginner Bible”
Then we played the “Ten Plagues” game.
Blood: Party Store (little containers of fake blood), and Swedish Fish candy, (because the fish died)
Frogs: $1 Store
Gnats: Walmart, craft Pom Poms
Flies: $1 store
Livestock: Party Store, packs of farm animals
Boils: “Dot” candies
Hail: ice cubes
Locusts: $1 Store, packs of winged insects
Darkness: black cloth blindfolds
Death of Firstborn: Party Store in the baby shower section
The game board was from the Party Store. It was an inexpensive plastic deviled egg holder. I added sticker numbers labeling each section 1-10.
Printed out paper, with multiple pieces that had the words;
“Let my people go!”
“No!”
“Go Now!”
Everybody got a pile of each of the pieces and some of each of the plagues.
We simply rotated around.
First person was Moses and would throw down the game piece (In the center) and everybody said
“Let my people go!”
Second person would be Pharaoh and throw down the game piece and every body said “No!”
Then we would figure out which plague and put it in the middle with great flourish.
Then the second person became Moses….and so on
Until the end when Pharaoh said “Go now!” everybody cheered.
The “boils” were the favorite, because we would lick them and stick them on our hands and then eat them and go “eeeewwww”! LOL
And they decided we had to play the game four times so everyone got the chance to be Pharaoh and play the “Go Now!” piece.

Everyone went home with baggies of all the plagues.
Snack: was Goldfish crackers.

Week 3: The Israelites and the Golden Calf
Again, thankfully it is close to the holidays and they already have Christmas decorations for sale in the stores.

Puppets socks:
First I got a new pair of white socks for each of the children and used an indelible sharpie marker to draw smiley face on the bottom. These were the Israelite puppets in our story. Later became “God socks”
Golden Calf: I wound up using a mechanical reindeer lawn ornament for the calf and 2 packs of gold garland.
Gold: Found gold coins (with paper money) Party supply section at Wal-Mart

The “Beginners Bible” only had the story of Moses going up and getting the “Ten Commandments”. So we read up to the part where the Israelites got tired of waiting and did our project.
Again we simply acted out the story. We put on our “Israelite sock puppets.”
We acted out how the Israelites got so tired or waiting for Moses to come down from the mountain 9when he was talking to God for 40 days!)
Aaron got tired of the people complaining and gathered all the gold and jewelry (there is where we had the gold coins), and then they made the golden calf. We then wrapped the gold garland around the reindeer and pretended the Israelites were worshiping the calf, whom they called Yahweh (yes, go read the story)
Then we picked up the story in the Bible when Moses came down the mountain with the Ten Commandments. We spent a little time talking about the second commandment (no idols)
Talked about how bad it was that they made an idol, especially when we should always be waiting on God.
We ended the story with putting on our God socks and I told them every time you wear your God socks, you remember to always look up and wait for God.

Snack: Since calves are cows and cows give milk: we made home made butter. Using heavy whipping cream in a glass container. Then you shake the container until it turns into butter. Oh, yes that was interesting. We actually pulled out a giant stuffed animal to put in the middle ‘just in case “we accidentally” dropped the glass jar. Since it takes about 10- 15 minutes to separate the whipping cream into butter, we played a cd of the “Perfect Ten” song (words here), 3 times.

Everyone went home with their “God socks” and gold coins. I also found a pack of cowboy Silly Bands (at Wal-Mart) that had a cow silly band in it. I gave everyone one, reminding them not to have idols in their lives. That was a hit.
Posted by Perky Gramma Teaches at 9:50 AM No comments:

...then he shot himself 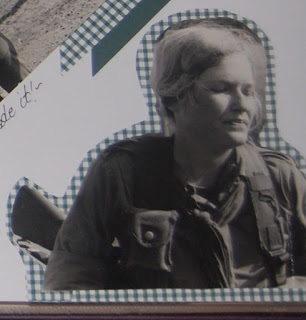 There was a guy, considerably older than I was, who was stalking me. The term “stalking” wasn’t used back then. But that is certainly what it was. We worked together in the military. I was military police and he was an investigator. He followed me around where I worked. Every. single. day. I felt like I was under surveillance. He would send me a bouquet of roses almost every day.
One night about midnight, he came to the guard shack I was working and started chatting with me. At one point, he just said “I love you and can’t live without you” and pulled out his gun and shot himself right in front of me.
Everything seemed to move in slow motion after that point. He slumped over the steering wheel of the cobalt blue sedan. I could see the bloody exit wound on his back. His right arm was limply splayed over the center console. Blood was splattered everywhere. When the bullet exited his back it pierced the upholstery of the drivers seat, right at a stitched seam.
This really messed me up as you can imagine. I was actually under investigation for the shooting, because of bizarre circumstances that surrounded the incident. He did live. It took years to heal from this attempted suicide that happened in front of my eyes.
Fast forward to many years later. There was a young girl at youth group, who was going through some very difficult times and wasn’t talking about what was wrong. Finally one night on the phone I cornered her and told her she had to tell what was going on.
She said “I can’t tell, no one could understand. Have you every seen someone try to commit suicide?””
Well, I could truthfully answer, “Yes I have, let’s talk about it”.
No human mind could have ever foreseen that conversation. Only God In His infinite wisdom, knew the truth.
So, who am I? Just another face you see everyday.

"Every adversity, every failure, every heartache carries with it

the seed of an equal or greater benefit."

original post: 031608 (CruX, the heart of the matter)
update: 100210
I just finished reading the story of Joseph again (Genesis 37-50) and I was reminded of one of my favorite sayings. "In every adversity; there is a seed of equal of greater benefit."
That reminded me of this story from my past.
One of the things I learned early on in life was to simply trust God in adversities.
We are not promised a perfect life. But He does work things out for our good.
Why not read the story of Joseph this weekend. How has God been there for you after times of adversity? Let's talk about it.
Now I am going to go figure out how I am going to incorporate the story of Joseph into the stage design this weekend.

Genesis 50:(NIV) 20 You intended to harm me, but God intended it for good to accomplish what is now being done, the saving of many lives.

Posted by Perky Gramma Teaches at 10:16 AM No comments:

Labels: just another face in the crowd, who am I
Newer Posts Older Posts Home
Subscribe to: Posts (Atom)

me and other stuff...

Perky Gramma Teaches
Some random things you may want to know about me... Passionate follower of Jesus... Sharing my journey of becoming debt free & creating a self sufficient lifestyle. Self-appointed 'vicar of vibe'... I love designing freaky experiential worship elements... I like smashing paradigms "boxes" with a two ton sledge hammer... and I am a wife, have two sons, 6 grandbabies and 3 insane dogs... -my life mission statement is... love God, love others, it's simple... oh, and I blog...